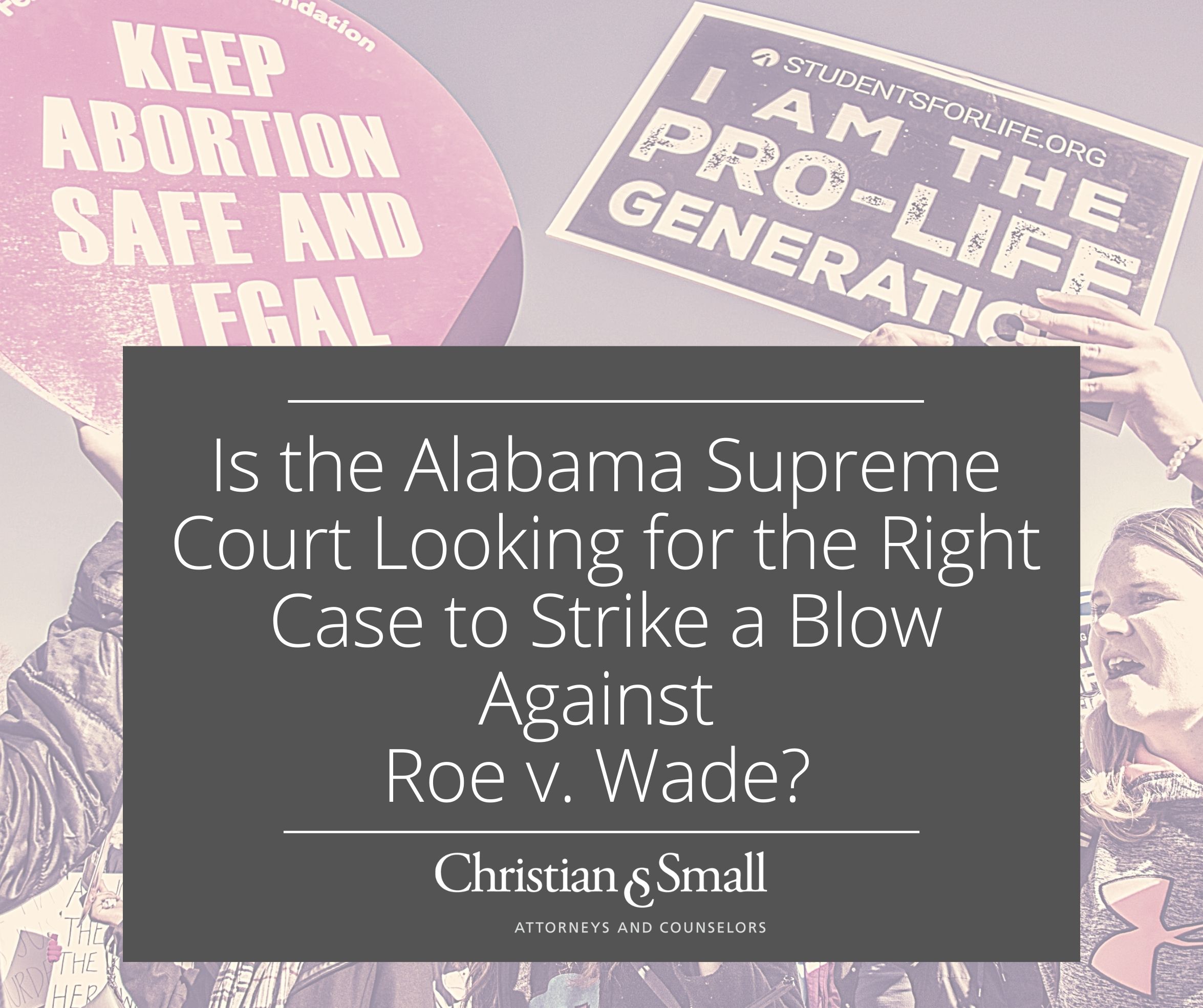 Is the Alabama Supreme Court Looking for the Right Case to Strike A Blow Against Roe v. Wade?
Prepared by Christina May Bolin
November 6, 2020

On October 30, 2020, the Alabama Supreme Court released its opinion in Ryan Magers, individually and on behalf of Baby Roe, a deceased unborn child v. Alabama Women’s Center Reproductive Alternatives, LLC, Alabama Supreme Court opinion number 1190010.  In this case, Plaintiff brought suit on behalf of his unborn child.  Per Magers, he learned that his girlfriend was pregnant and advised her that he wanted to keep the baby.  She went to the Alabama Women’s Center at approximately 6 weeks pregnant wherein she was prescribed an abortifacient, thus terminating the pregnancy.  Magers sued the Alabama Women’s Center for wrongful death as personal representative of the estate of Baby Roe also naming fictitious parties including the pharmaceutical manufacturer of the abortifacient[1].  The trial court dismissed the complaint and Magers appealed.

Magers presented only one argument for consideration by the Supreme Court:  Whether the trial court erred in ruling that “the estate of a child killed in utero cannot sue the abortion providers for wrongful death.”  As the Supreme Court in its per curiam opinion cited, the entirety of Magers argument is below:

While it is certainly noteworthy that this appeal was lost as the result of the almost incomprehensible failure to properly make an appellate argument, the more interesting aspect of this opinion really lies in its existence.  The Alabama Supreme Court has done a truly admirable job of plowing through the volume of cases it sees.  As a necessary result, the majority of decisions affirming the trial court’s ruling are issued without opinion.  Indeed, those that are denied on procedural grounds usually contain a statement by the Court citing the deficiency and affirming the trial court ruling.  Here, Justice Mitchell’s special concurring opinion is perhaps the actual import and noteworthiness of the opinion.

Justice Mitchell wrote that he took this “opportunity to point out what I consider to be several serious problems with [Roe v. Wade and its progeny].”  Justice Mitchell goes on to explain why he believes Roe v. Wade lacks constitutional support.  In what may be characterized as his final argument, he states that “Roe . . . hamstring[s] states as they seek to prevent human tragedy and suffering.”  He closes by respectfully urging the United States Supreme Court to overrule Roe v. Wade and for “other courts across the country to raise their judicial voices, as appropriate, by pointing out the constitutional infirmities of Roe and Casey and asking the court to overrule those highly regrettable decisions.”

Chief Justice Parker and Justices Bolin and Wise concurred in this special concurrence.

A Call to Arms or an Invitation?

Clearly, Justice Mitchell sounds a call to arms to other members of the judiciary, but could this also be construed as an invitation for cases in which this Court might have the opportunity make its impact on Roe v. Wade?  This action was couched as a wrongful death action.  The Court never had to address the merits of the claim – and consequently the merits of the response –  because the appellant’s brief was so procedurally deficient.  This case created the perfect vehicle for this kind of special concurring opinion.  Given Justice Mitchell’s concurrence, this Court seems to actively be looking for the right case to raise its “judicial voice,” and potentially render a judicial blow to Roe v. Wade.  A wrongful death case, such as this one, may be a roundabout way of getting the result the Justice Mitchell, at least, seeks.  However, if the Court was presented with a procedurally appropriate case, all indications are that this Court would jump at the opportunity.  The question becomes, will this Court get the opportunity and given the current United States Supreme Court, what will happen next?

[1] The complaint is the barest minimum of notice pleading.  Plaintiff does not set forth under which theory of wrongful death he alleged.  Thus, it is unclear if the case was medical malpractice, pharmaceutical malpractice, general negligence, products liability, etc.

[2] Those two sentences in the brief were copied from the complaint.

Christian & Small LLP represents a diverse clientele throughout Alabama, the Southeast, and the nation with clients ranging from individuals and closely-held businesses to Fortune 500 corporations. By matching highly experienced lawyers with specific client needs, Christian & Small develops innovative, effective, and efficient solutions for clients. With offices in Birmingham, metro-Jackson, Mississippi, and the Alabama Gulf Coast, Christian & Small focuses on the areas of litigation and business, is a member of the International Society of Primerus Law Firms, and is the only Alabama-based member firm in the Leadership Council on Legal Diversity. Our corporate social responsibility program is focused on education, and diversity is one of Christian & Small’s core values. P